Audience members will have to present their vaccine passport along with a government-issued photo ID upon arrival. Masks are also mandatory. 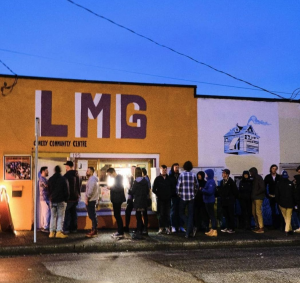 With the impending closure and demolition of Little Mountain Gallery, which has been home to Vancouver’s many DIY comedy shows and a safe space for budding young comedians, Graham’s 24-hour stand-up feat aims to raise money for a new location for the venue.

The veteran comedian is ready to launch into this marathon set (with only a few bathroom breaks!) with inspiration from his talented team of comedians as they feverishly write jokes for him to read, riff, and rate.

“Little Mountain Gallery’s closure is a big loss for the comedy scene in Vancouver,” says Clark. “We’ve had two full-time comedy clubs close and another long-time comedy hangout, The Kino, also shuttered.
Our comedy community needs a place to really be able to experiment and build new audiences. I will try to keep this in mind when I’m at hour twenty.”

We’ll be live-streaming the show but are also selling tickets to the performance in chunks of 1&1/2 hours.

You can buy tickets here.
Tickets are $20 and will be available online on Friday, November 26.
Popular times will probably go fast!
If you can’t make it, please find our fundraiser here. 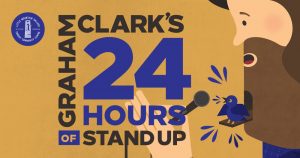 Check out for more Bored in Vancouver Monthly Calendar rooting for local events.