Perhaps you remember a time when a walk through the woods was an invitation to fill your pockets with treasure in the form of smooth rocks, the perfect multi-coloured leaf and a twig that curled in just the  perfect way. My mother used to dread washing my clothing because if there was a pocket it would be filled with all sorts of surprises. My eyes would scan the trails, hyper aware of those treasures that stood out to me among the shrubbery. If you’re a fan of BIV you may have already read our Introduction to Geocaching, but the best way to experience a hobby is by taking a walk with an advocate.

The Story of Geocache

Geocaching, the art of hiding treasures in plain sight, first took place on May 3, 2000, by Dave Ulmer of Beavercreek, Oregon. The location was posted on the Usenet newsgroup sci. geo. satellite-nav as N45° 17.460 W122° 24.800. Since that day Geocache hobbyists have been gathering together to celebrate the hunt ever since. If you’re new to the concept of Geocaching, you’ll want to read our beginners guide.

Fun Fact: In Vancouver, there’s one famous geocache, well known to the community because it was hidden in 2014 and it’s been searched extensively, but never been found.

“That’s also part of the game.” reminds Ian, “That’s part of the adventure. Collectively we spend hours together. I know one person who cumulatively has spent over 12 hours searching for that geocache. But that’s part of the adventure and sometimes you find it, sometimes you don’t. But when somebody finally does find it, I guarantee that will mean so much more than if the cache owner just said, oh, yeah, it’s hidden underneath that rock. Right?”

Ian started in 2010 as he recalled his own story when his older brother introduced him to Geocache. “My brother was over for a visit and he was telling me about this cool game that he’s been playing for awhile. He says, ‘there’s gonna be a couple nearby.’ as he pulls out his phone.
I lived next to a park and there was one only 30 meters away! We threw on our shoes and we went running to find the cache. It was a container drilled inside of a rock!” Ian was mindblown and from there on he was hooked. “For the first three years as a novice, I only found 30 geocaches, then in 2013, I was on a roll! By this year, I should’ve reached 4000 finds,” Ian assures.

Many of the more than 4000 geocaches were found within British Columbia. The greatest part about this hobby is that it is global, and Ian has been able to enhance his travels as a “Adventure Planner”. In  London, England Ian found 50 over during his two week vacation. In Mexico, outside of Cancun his pursuits guided his adventure to places off the beaten track where the average tourist would have never explored on their own. “It’s always an adventure. It’s always lots of fun.”

It’s not all danger, choosing a well designed series can be very rewarding. Ian recalls, “It’s not common but I would say maybe 10% of geocaches I find are super creative and fun. And when I first started geocaching that became one of my mantras. I want to be well known within the community as a high-quality hider. So whenever I hide a geocache it’s not just shoved under a tree, I like to camouflage mine as well as possible. And over the 10 years, it has come to my attention that I might have made a name for myself. I’ll meet somebody I’ve never met in my life before and as soon as they hear my geocaching handle, Lazyee_bones, they’re like, “oh my gosh, I love your geocaches.” And that’s one of the rewarding aspects of giving back. It really stands out for me as part of the social aspect of the experience.”

The Reveal on the Cache

“I find it absolutely fascinating and exciting. Because as a whole, the average geocacher is not necessarily a super-outgoing and charismatic person. They’re more generally introverted, acting from their own quiet corner.  Being able to just connect with somebody you’ve never met before, and start talking about the experiences you’ve had that they’ve also had, whether it’s the same geocache, or just the same kind of concept, in a different location is very exciting. “

“There’s a level of OCD to finding caches,” Ian laughs. “When you log your find into the geocache app, the green dots turns into a smiley face. Like with the old Pokemon Go games, you just gotta catch’em all!”
At the same time it’s a great way of exploring a local neighborhood.
“For example” Ian explains, “I don’t know where I want to go today but I want to go for a long walk along the water. So I grab the map and I find 15 geocaches all in a row all along the water. I realize I have never been there before, so I off I go on my adventure for today. It’s as simple as that you don’t have to go overboard with planning. I use the geocache map as a plan.”

Listening to Ian relive these moments, fascinated by his ease and candor – If he could plan a great adventure, perhaps so could I?

Required Gear:
A waterproof pen, pencil or stamp
A phone with GPS
An GeoCache App ( many available)
Shoes that can go off trail (if needed)
Outdoor protection (umbrellas, sunblock, layers)

6 Steps to create your Geocache

Step 2. Choose an app where finders can rate

As apps go, Geocaching.com has its own app with a blog space with articles such as ; Geocaching etiquette or How to write your first log ( the record of your experience.) Over the years it has improved a great deal. There are other geocaching apps available, most are paid to play. Choosing an app is a personal preference.

TIP: Nurture your Geocache Journey
“I’ve seen a lot of people trying to search for level two, three, four difficulty cache, and then they just get frustrated. They give up on the game entirely. If you start with a simple cache, you can hone your skills which leads you to start seeing things when you’re walking around.”

A lot of the newer geocaches don’t even realize that there is a geocaching website, geocaching.com. You will find that there are features and information available on the website to support finding geocaches and planning your trips.

When you find something, remember that it is still a secret within the game. If you find something first, be aware of everybody around you in your hiking party. You want to still keep it secret and not rob the joy from others.”

Once you have signed off on the log, replace the cache exactly as found. Lots of people will decide, ‘Oh, I know how to hide this better’ and try to hide it themselves. That is not the point of the game. That’s how you would hide your own geocache. Honor the way the geocacher hid it as it was.

Step 4. Gratitude, helps you relive it

Be grateful and appreciative to the person that is hiding it. Consider the experience the person has taken their own time out of their day, out of their lives to create an adventure for you. Simply leave a little note of appreciation on Geocaching.com with a thank you for the cache. Lots of people will just write down four words but a meaningful note goes a long way. A hider likes to hear small little stories on how the person found it or how they appreciate and enjoyed the adventure.

If you cannot find a geocache, it’s also important to log a DNF (did not find) in the online log. This will help the geocache owner, as well as future searchers, be able to establish whether maybe that cache is not there. A more likely reason is that it’s a much more of a difficult geocache. New geocachers tend to search for five or ten minutes and give up, ‘Oh, it’s not there’. They’ll write this on the log but in reality it’s actually just more of a difficult find.

TIP: The game is about attempting to find the geocache.
That’s the whole point of it. It’s very common to get messages like “It’s not there. Where is it?” That’s not part of the game. Half of the adventure and half the excitement is actually finding it. So a better option is to approach a conversation by saying, “Thank you so much for hiding this. I’ve been searching for ____ minutes. Could you give me a hint?”
A lot of geocachers will be willing to provide a hint.

Step 6. Don’t give up- the reward is in the journey!

“I think patience is a big one. In this society people want you to give them the answers immediately. If not, it is acceptable to just pay for it. Geocaching is like a labor of love. It’s incredibly worth it when you finally find the cache and it means so much more that you took the time to find it. It can be frustrating at times. That’s part of the game.”

TIP: Get to know our robust Vancouver community.
If you are stuck or need moral support, call a friend for advice on how to spot those objects that seem – just a little- out of place.

One of the organizers of the 18th annual GeoWoodstock event, wrote to all the adventurers this invitation for Mega-Event cache (attended by 500+ people) from all across the globe

“Those new or experienced in the game of geocaching will be able to experience the social aspect of the game to an entirely new level on August 13, 2022. For the first time ever, Canada will host the 18th annual GeoWoodstock event in Abbotsford, BC all day on Saturday, August 13, 2022. This “Mega” event will have games, vendors, and geocaching activities that will be a once-in-a-lifetime fun-filled event that any geocachers or those curious about the game won’t want to miss! Find out more at GeoWoodstock.com and make sure to log your “Will Attend” at GC86VDF so you don’t miss a moment of the fun.”

These are not for the beginner but if you continue on pursuing Geocache as your hobby, these Geocache’s await you...

Stephanie is a contributing writer to Bored In Vancouver always on the hunt for niche communities and people with hobbies and activities to share. She is currently looking for people to include in a book that celebrates hobbies, for the love of it. Submit yourself for an interview 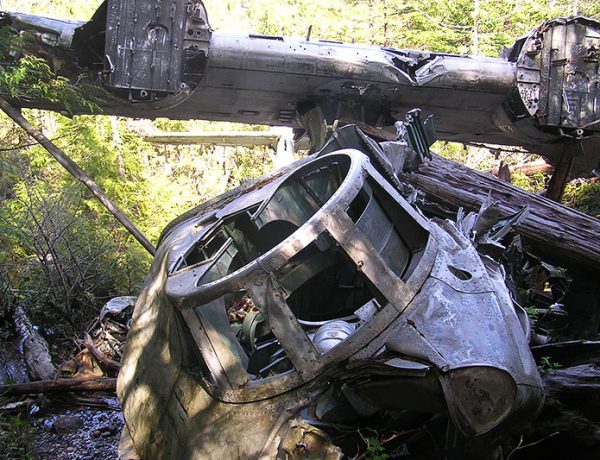 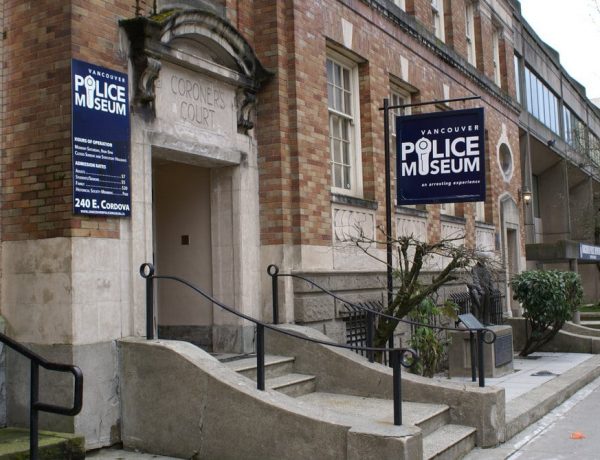 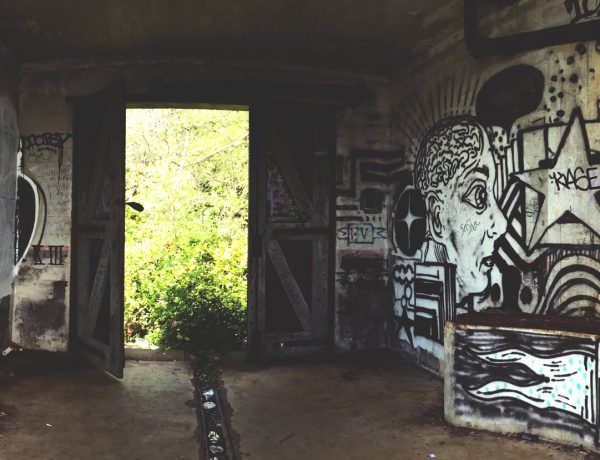 The secret bunker at Lighthouse Park